This article takes a look behind the scenes to share why PlugFest, and the BACnet protocol, are experiencing unprecedented success. BACnet is the networking and communications protocol that the building automation industry has accepted as its standard. It was developed under the auspices of the American Society of Heating, Refrigerating and Air-Conditioning Engineers (ASHRAE) https://www.ashrae.org/. BACnet International was founded to facilitate the use of the BACnet protocol in building automation and control systems and, as part of that agenda, started hosting the PlugFest event 17 years ago. PlugFest brings together manufacturers of BACnet products providing the opportunity to test their products with BACnet devices from other vendors. The official BACnet PlugFest 2016 summary is provided by BACnet International in their monthly Cornerstones publication. This report clearly documents the success of the PlugFest 2016 event.

BACnet International’s PlugFest 2016 hosted 80 engineers on 37 teams representing most of the primary manufacturers in the BAS industry. These teams included a lot of newbies who were there to ensure they get BACnet right. PlugFest is a major financial and resource commitment so not all companies attend the event every year. Duffy O’Craven, head of the BACnet Testing Labs coordinated the actual test activities. Twelve test sessions were set up over a 3 day period with two methods of testing being utilized. Teams were paired for 1 hour or 2 hour sessions where they independently negotiated what they would test and how they would do it to determine the interoperability capabilities of their products. Then, each group moved onto another pairing. The other test method was a round table where as many manufacturers as possible brought their products to the table and to see what happened. 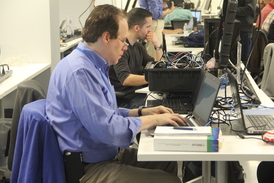 Here is what one of the newest attendees Dan Ronald, Co-Founder & VP Products, Optigo Networks had to say about the PlugFest experience.

"2016 was Optigo Network's first year at the BACnet PlugFest. We weren't sure what to expect, but everyone was very friendly and accommodating while showing us the ropes. At the start of September we launched a new software product for integrators called Visual BACnet. This tool is designed for troubleshooting BACnet systems and for giving integrators a broad system level view of a converged building network. We were able to deploy this tool on the round-table, monitor the network in real time, and watch the chaos unfold before our eyes. We were able to catch a lot real issues on the network while finding and fixing some bugs in our software. We received a lot of great feedback on the tool which will go in to enhance the product. All in all it was a great experience. Many thanks to the BTL-WG PlugFest organizers for creating such a fabulous event and to the participants for being so accommodating in our first year.“

Participants needed to move and reconfigure their equipment within a 15 minute break between test sessions. This means that, on average, for each test session 20+ of the 30 teams needed to make this move. For the roundtable sessions having an effective Ethernet networking infrastructure to support about 15 teams working together was provided.

Many vendors bring pre-release, or recently released, products for testing. There is a strictly enforced non-disclosure that everyone agrees to beforehand. No-one is allowed to discuss test results outside of this forum. It’s as if everyone makes who they work for secondary and the primary focus gets put on moving the industry as a whole forward with better BACnet-enabled products. It’s an environment where the industry experts are there acting as mentors for the newbies. The old guard is challenging each other to improve what they have. And, the ultimate winner is the building owner and customer base of each of the manufacturers. 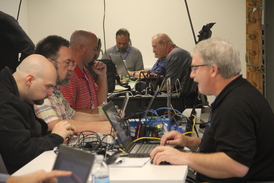 The event has historically rotated to different venues to balance the burden of travel for the participants. It was hosted the last two years at the University of New Hampshire Interoperability Laboratory https://www.iol.unh.edu/. BACnet International has signed a contract to go back to this facility in 2017. The UNL IOL facility is a perfect environment for PlugFest activities. The support staff at the IOL was responsive and understood what our members were trying to accomplish. The infrastructure provided by the IOL facilitated our testing without getting in the way. Catering services were available in the facility to serve breakfast and lunch during the event. This group loves to eat!

Here is what Coleman Brumley of Polarsoft had to say about PlugFest.

“As an attendee of just about every PlugFest, I can tell you that these events are the single greatest learning experience for BACnet developers out there barring in-classroom instruction. The exposure and interaction with other BACnet developers, the engineers that are directly responsible for development of BACnet product, is priceless. Attendees have the opportunity to interact with members of the BACnet committee and gain feedback and have an opportunity to obtain insight into the BACnet standard from folks who have actually authored content. This event gives developers a chance to catch and correct interoperability issues before product is deployed, making the corrections of those issues much less expensive, and much less frustrating!”

Most of the attendees were from the U.S. and Canada. But, we also had attendees from as far away as Australia and Japan. The international participation is growing every year. There are BACnet PlugFest events in other parts of the world hosted by sister organizations but this is the mothership.

“This was my 2nd year participating in the PlugFest and I found this event being very valuable experience for me as a software quality assurance because I was able to see some interoperability issues that couldn’t be seen at my work and all the people from other vendors I tested with were very friendly and cooperative to help me investigate the issue. As a BTL-WG volunteer, I was also happy to present the short educational session to introduce what we do for BTL-WG and how everyone can be involved and give back to this great community/people in the BACnet industry“

There is usually one evening set aside for a group social event. The last two years the group went on a harbor cruise https://islesofshoals.com/. There was no testing going on during the cruise but you could hear important chatter all over the ship. People were getting to know each other better and learning about each other’s roles at their respective companies. A large part of the value in this event is the long term relationships that are built that transcend PlugFest and help to mold the way the entire industry works.

“From attending various PlugFests over the years for my current (Eaton) and previous employer, I do have some feedback that may or may not be similar to what others may provide. Over the years, PlugFest has been an invaluable tool for manufacturers of BACnet enabled products. In my years of attendance spanning two different companies offering BACnet products, two full days at PlugFest can help an engineer receive feedback that would take an entire calendar year or more to receive through natural means (customer feedback, technical support feedback, etc.)

I've always found PlugFest to be what it is advertised as. A neutral, friendly environment to test and interact. It is this event that makes BACnet so successful. It helps ensure the high level of interoperability that facility owners expect when selecting "best of class/breed/pedigree" for technology within their facility. Many industries are also represented. While BAS continues to be the largest, others from electrical, security, life safety, specialty software and others attend each year. The growth and expansion of BACnet is evident based on the companies that attend this event. It was good seeing everyone again this year. I Look forward to next year!”

The S4 Group PlugFest experience over the years mirrors what everyone has previously described. In our first years of participation we were nurtured and encouraged by the experienced participants. I like to describe my first impressions of PlugFest as if everyone put Duct Tape over their company names and logos and wrote a great big BACnet in its place. Even when we identified problems in our products the experience was positive and supportive. In more recent years several of our most appreciated enhancements came from suggestions and ideas at PlugFest. We’ll keep coming back because it works!

Attendees quoted in this article have given their permission for their name and company affiliation to be published.