I was wearing multiple hats during our recent visit to the NFM&T Baltimore show. Nancy and I always attend this show as representatives of The S4 Group. We were pleased at the experience and the significant improvements that show management made this year. We were also pleased that show management recognized and retained some of the things that makes this show unique; Nancy talks more about this in a separate article. I was also there as a representative of BACnet International in my role as marketing committee chair. I presented two sessions of BACnet 101 and played a supporting role with David Nardone, Regional Operations Manager for BACnet International, in the Solutions Exchange Networking Event.

The first session of BACnet 101 was a sellout with over 140 people in attendance and standing room only. 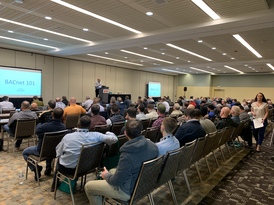 David provided literature and a discount voucher for a course offered by The BACnet Institute. Every bit of collateral that David brought for the event was picked up by the attendees. 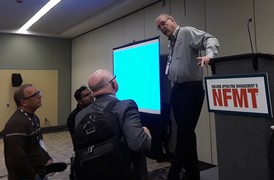 The afternoon session was attended by about 50 people and because it was a smaller group, the discussions could be more interactive.

We had about a dozen people stay after the presentation with questions. I was pleasantly surprised by Jay Robinson of Damuth Trane when he stayed after to introduce himself in person. Damuth is a major S4 partner and it was great to hear how well their projects are going and to put a face to a familiar name.

Preparation for this event took weeks of effort to bring the presentation up to date. It was a joint effort between myself and the BACnet International team. Based on the reception that we received it was well worth the effort. BACnet 101 covers:

• The history of BACnet
• BACnet market share and role in eliminating stovepipe applications
• The BACnet value proposition from the standpoint of the building owner or operator
• The ability to innovate provided to BAS system developers by BACnet
• How to work with BACnet
• How to specify BACnet
• Where is BACnet heading, including Buildings IoT and Secure Communications
• The role of PlugFest in delivering interoperable systems
• The role of BACnet Testing Labs in certifying compliance to the BACnet standard
• Training and Educational services offered by The BACnet Institute
• The Building Internet of Things (B-IoT) and the criticality of local control in buildings

There are far more slides, and far more topics, than can be completely covered in a one-hour session so it was necessary to read the audience and emphasize the topics that garnered interest. Therefore, each session was a bit different.

I was slightly delayed in getting to the Solutions Exchange event because of the number of people who had questions at the end of the second session. However, it was rewarding to have several of the participants at the Solutions Exchange table identify themselves as attendees of BACnet 101 who wanted to continue the discussions and get more information.

After another round of revisions to capture what we learned at NFM&T, the BACnet 101 presentation will be made available through The BACnet Institute for BACnet International members to use in their own training programs.

Good News – S4 Boot Camps are Back in Session