As we were reviewing last month’s newsletter results around the water cooler, it became obvious what my next article needed to be. Without BACnet priority array services it would have been impossible to deliver the 3-way integration that has become the hallmark of our S4 Open Appliances. I’ve done hundreds of presentations talking about our ability to co-exist with the legacy supervisory controller. BACnet made that possible so I’m going to zero in on why.

I’m going to use our S4 Open: BACnet-N2 Router as an example. The three integrations are: 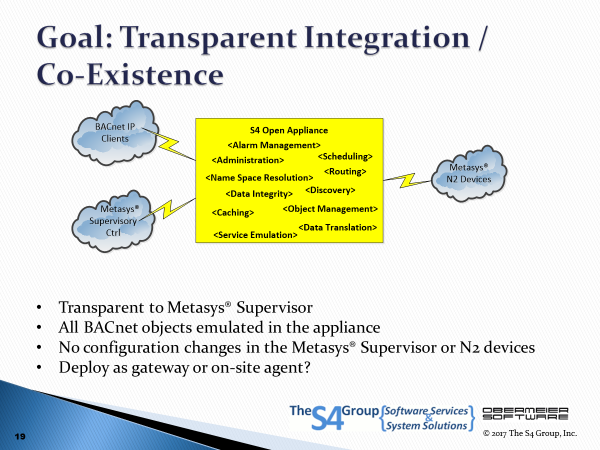 Now, we add a bit of magic to the mix. Because we wrote our own BACnet stack, we have the flexibility to implement the details as we need them in order to deliver the services needed. Remember, BACnet is a standard that specifies the objects, properties, and services that enable interoperability between devices and systems. Implementation details are left up to the developer, leaving the door wide open for innovation. Since S4 integrations were intended to be scalable to support installations of any size, we needed to solve the problem that if we did nothing special, every point in the installation would be under the control of the last client or application to command it. The question of who has control of a point needed to be deterministic. The solution was to extend the BACnet priority array mechanism to also support N2 transactions coming from the supervisory controller. Supervisory controller N2 transactions now follow all the same priority array rules as BACnet transactions. They will only be routed to the field device if the supervisory controller is controlling the point. Thus came the feature name Supervisory Controller as a BACnet Client. Again, from the standpoint of the supervisory controller, it is business as usual.

The S4 Box presents itself as a BACnet Router to the BACnet ecosystem. When the system is installed, each S4 Box is assigned a virtual BACnet network number. Every field device discovered on the N2 bus is emulated as a BACnet/IP device under this virtual BACnet network. The core services in the S4 box ensure that BACnet does not have to know anything about N2 technology, or the existence of the supervisory controller. S4 device templates automatically define the BACnet point mapping for each device and all associated BACnet properties for the point and device. This includes a mechanism that enables BACnet clients to specify the basic functions of read, write, override, and release for integrated N2 points. Major BACnet network properties and services supported are configurable from the user interface. Performance metrics are built into the system to enable monitoring of how well BACnet communications are operating. From the standpoint of a BACnet client, it is talking to BACnet devices and all features of BACnet are fully supported.

The core services of the S4 box implement a protocol independent integration engine and play a key role in each of these integrations. Because of the flexibility of this architecture, we have been able to do things with the BACnet-N2 Router that many people have to see in action before they will believe that we actually deliver the capabilities that we do, including automation of much of the integration process itself. This framework of core services also sets the stage for many new integrations and products planned for the rest of this year.