We all have our favorite causes and charities. I’d like to share one of mine and ask those of you who can to help The Golden Spike Chapter of the Railway and Locomotive Society restore the Denver and Rio Grande Western locomotive 223 to operation in time for the 150th anniversary celebration of the driving of the Golden Spike in 2019. 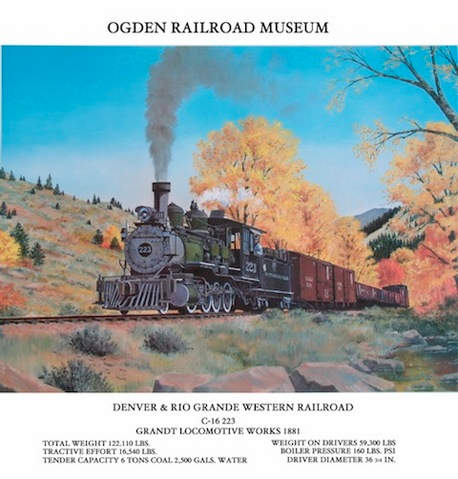 I became affiliated with this group soon after relocating to Utah in 2004 and was enamored with the idea of seeing an antique locomotive built in 1893 saved from the scrappers and restored to its former glory. Then, what really hooked me was the dedication of the members and volunteers working on the project and their determination to see it to completion against almost impossible odds. They’ve been working on the restoration since 1992, making slow and steady progress. Essentially, the entire locomotive and tender is being re-manufactured using original manufacturing and assembly techniques, along with the remaining parts of the original where they were salvageable. The next phase of restoration involves refurbishing and certifying the boiler. This is something that must be done by licensed professionals – that’s where you come in during this season of sharing and giving. A GoFundMe project has been set up to help defray the costs associated with the initial steps in the boiler inspection and refurbishing. Any help that you can provide is sure to be appreciated.