The Chameleon in S4 Clothing

During the preparation for this article I did a bit of research on the Chameleon. It is a popular belief that it changes colors to camouflage itself. However, there’s more to it than that; it seems that the color changes are a result of its environment, its comfort level, and its level of anxiety. It turns out that the chameleon analogy is more fitting than I thought.

Our S4 Open Appliances were designed to be seen when desired and completely transparent otherwise. They evolve and change as required to deliver services to the BAS and associated value added applications. Today, our S4 Open: BACnet-N2 Router integrates into legacy JCI Metasys® N2 systems and publishes to either BACnet/IP or OPC. At the same time, we can publish to the legacy Metasys® supervisory controller without it realizing that we are there.

The S4 product started out positioned as a sophisticated gateway whose typical use case was competitors of Johnson Controls using it to introduce their head end operator workstation and global controllers to buildings fitted with JCI legacy N2 field devices. As part of our platform, we went beyond just protocol conversion and automated as much of the integration process as is practical. One of the innovative features of our S4 Open: BACnet-N2 Router is its ability to enable the legacy Metasys® head end to transparently co-exist with the new BACnet technology being introduced.

As cloud-based applications started being introduced to the marketplace, a number of the analytics and other value-added application providers found out about our system and started using it as an on-site agent for bi-directional data access from the legacy N2 devices, collecting data without interrupting operation of the existing Metasys® head end. Thus, the S4 system found a new use case, and a new market, without us having to change any code; we simply took advantage of a feature that already existed in the S4 Open Appliances.

Our release 1.30 externally focused on enhancing our BACnet stack and underlying services to improve the BACnet client user experience and isolate the N2 field devices from the ever increasing demand for data. The major enhancements here were support for both confirmed and unconfirmed COV. We also added a S4 Router caching service that provides services similar to COV for points and attributes that use RP / RPM services. Behind the scenes, we put a huge amount of effort into restructuring the code in preparation for upcoming releases 1.50 and 2.0. Release 1.50 is a transitional release that starts the migration to new hardware platforms, multiple new OS support, and a host of new services and integrations.

First, the easy topic. Some time ago Advantech announced End-Of-Life for their UNO 2059GL platform that we have been using for many years. Its successor will be the Advantech UNO 2362G. It comes natively with Windows 7 Embedded Standard as its OS. Our current 1.30 firmware has been ported to this new hardware and OS and testing is underway with a very high priority. Advantech worked very closely with us to deliver these systems with an expanded case supporting either two or four fully isolated RS-485 ports.

We are taking care of our existing installed base of systems hosted on the Advantech UNO 2059GL platform. These systems were originally delivered with the Microsoft Windows CE 5.0 operating system. Our release 1.50 upgrades the OS on these machines to Microsoft Windows Embedded Compact 2013 and moves the firmware to the same code base as our upcoming release 2.0, to the extent that those features can be supported by the underlying UNO 2059GL hardware. Upgrades to 1.50 will be offered to anyone with a currently active Software Assurance subscription. The upgraded OS improves system security and facilitates changing from Microsoft DCOM to web services/JSON communications between the appliance and our S4 Open Management Console.

Major release 2.0 will be out this summer and will add the following capabilities:
- Publishing with web services / JSON to interface to cloud-based services and RESTful interfaces
- Integration into Novar BAS systems
- Integration into BACnet MS/TP systems
- Providing BACnet/IP services for ecobee WiFi thermostats
- Completing the migration of all firmware to ISO C++ 11. This removes OS dependencies and allows us to later move to other O/S such as Unix derivates (Linux, Android) and to cloud-based implementations.
- The current S4 Open Management Console will become an HTML5 based web service and introduce a cloud-based “Homebase” service that incorporates value added services.
- Re-architecting the system to contain protocol specific information in individual .dll files to make the system more easily extensible by adding protocol plug-ins

Later in the summer we will include support for integrating into Siemens Apogee P1 systems. One of the maintenance releases for 2.0 will introduce BACnet scheduling and BACnet alarming services.

A lot of the work we are doing in the above releases positions the S4 Open Appliances to keep up with the new Web Services, RESTful interfaces, and tagging technologies that are rapidly evolving. It’s too early to make any product announcements in these areas but suffice it to say that we have been staying current with industry trends and will have the technology to enable the new requirements.

We’ve been involved in far too many support cases that required our integration partners to make a trip to the customer site. We clearly saw the need to improve remote diagnostic capabilities for the N2 bus. We have not been able to find a commercial hardware platform that addressed this need. As good as the UNO 2362G product is, it also did not meet this requirement. So, we embarked on a project to design and have a S4 specific hardware platform custom manufactured for us. The initial prototypes of that product are now under test in our S4 test lab. Much of the internal work on the Release 2.0 code was done to accommodate this new platform. The CPU is based on the TI Sitara chipset which provides scalability to both larger and smaller implementations. The RS-485 support chipset is a high end product controlled from TI designed for rugged environments. 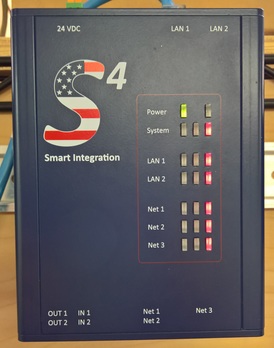 RS-485 termination and biasing is built into the system and by the system firmware. Diagnostic testing of the N2 bus can be performed remotely to save our partners windshield time whenever possible and to increase the chances of them arriving on-site with the correct parts when they do need to make a site visit.

Even after the new S4 hardware is available, the Advantech UNO 2362G hardware platform will continue to be offered as an option when our partner prefers to, or is mandated to, implement their systems on commercially available hardware.

Klaus Obermeier, president of our development partner Obermeier Software, led the design effort for this new hardware platform. Obermeier Software has his own line of products focused on the industrial automation world. The architecture of the Obermeier Software SNMP OPC Gateway family is converging to use the same architecture that the S4 Open Router 2.0 uses, making the protocol support interchangeable between our products. This very quickly could bring additional OPC and SNMP support to the S4 product. Expect that OPC UA support will be one of the first to appear in the S4 products. Some environmental monitoring products focused on high availability installations use SNMP.

Obermeier Software also has code to support the several variations of Modbus as protocol plug-ins. Meters, pulse counters, etc. typically will support Modbus. Newer technologies will support some variant of IoT protocols. They usually can be decomposed into a web services / JSON offering. This summer we will be publishing using this technology so it is a relatively small incremental step to be able to integrate these devices. I don’t want to minimize the effort because there always is the work involved with Q/A testing, field testing, etc. to deliver the quality that we expect of our products.

We haven’t done anything in the LON area. We may need to consider this in the future if we get more involved in metering applications and building infrastructures continue to converge into smart buildings. Echelon was at one point a major contender in the BAS space but they refocused their efforts on metering applications in recent years. Until it becomes necessary to invest in this technology we will continue to refer our partners to providers who are expert in this technology.

By this Fall, we will be at a point where we will be evaluating other legacy BAS systems to determine which ones are viable candidates to include in our offering. Some of these systems are either too old or have too small an installed base to justify a full scale R&D effort to develop integrations to them. We are negotiating with a 3rd party who has a number of drivers to bring these into the S4 Open router environment. We’ll know more on this by the end of the summer. The S4 products have always been chameleon-like: they blend in with their environments and respond/react to the demands of the industry. With the current round of enhancements in mind, it looks like we will be spending a lot of the long, hot, summer days in the air conditioned test lab instead of at the beach.