With the International Facilities Project, the Calgary International Airport is undergoing its single largest expansion to date. The plan is to have new Canadian and U.S. customs facilities as well as 22 additional aircraft gates. The Airport is expecting to open the new terminal in October 2015, and will cover an area of two million square feet.

The original airport was automated and maintained using a JCI Metasys system by Johnson Controls Inc. (JCI). Many of the Metasys controllers and field devices installed on the existing terminals are between 10 to 15 years old and are reaching the end of their life. These terminals contained 21 Metasys Networks . When the Airport initiated the expansion phase, ESC Automation, a partner company of Delta Controls, was awarded the contract. Delta controls are a manufacturer of building automation controllers and field devices which communicate using the BACnet family of protocols. Thus, the system from the new terminal would not be able to natively communicate with the legacy system from the old terminal. The Airport had two choices, A) to remove the Metasys system from the old terminals and replace them with a BACnet system (this would be a huge project with considerable expenses) or B) install The S4 Open:BACnet-N2 router as an integration platform.

Major Project Challenges (from an integration point of view)

1) It is almost impossible to get ‘down’ time in an airport.

2) Normal operation must continue during construction and integration.

3) Existing terminal HVAC automation is based on JCI Metasys. New terminal is automated using a Delta System. Airport Operations require one integrated system for monitoring and controlling all terminals. The two systems are not compatible.

These three challenges would become next to impossible if the airport chose to replace the old Metasys system with a new BACnet system.

What is the S4 System and Why Has It Been Chosen?

The S4 system, aka S4 Open: BACnet-N2 Router, integrates up to three Metasys N2 busses into a single virtual bus without causing conflicts between duplicate N2 addresses. The S4 Router can also be configured to serve all N2 data into an ethernet network using the BACnet-IP protocol. The advantage of the S4 system is that it is extremely easy to configure and install as it automatically detects, collects and serves the data with minimal configuration.

The S4 system was chosen for many reasons as it tends to be a superior product in its market. Most other gateways tend to be inflexible and thus are difficult to configure and require many hours of support. That being said, The Calgary Airport specifically chose the S4 system because:

1) It allowed existing controllers to continue to function (as they always did) without interruption AND at the same time expose the data via BACnet so that the new Delta System GUI can access, monitor and control the existing Metasys system without having to change any of the Metasys equipment.

2) A Implementation of the BACnet Priority Array Mechanism for N2 devices in the S4 Open: BAnet-N2 router allows the integrator to control whether the legacy or new system can take control of a field point. You can have the legacy controller controlling a particular zone while, via the S4’s BACnet interface, the zone can be monitored using the new Delta GUI. Then as the project progresses, by simply by starting to issue commands from the Delta system , the new GUI can take control of the zone without making any changes to the legacy system.

3) Other gateways require the mapping between the legacy system (JCI N2 Open in this case) and the new system (BACnet) to be done manually. The mapping relates a point in the one system to a point in the new system. Manual mapping is prone to manual errors and requires accurate input information about the installed devices. The S4 gateway avoids this by connecting to and discovering the field devices and auto creating the corresponding BACnet points to monitor and control the field devices. The result is always accurate. This site with 21 Metasys Networks has over 1000 field devices in total. Each device has dozens to hundreds of points. The total number of points that would need to be mapped is tens of thousands. That constitutes a significant engineering effort. Hence a major reason why the Calgary Airport chose the S4 solution was to save on engineering labor cost and minimise human errors and thus increase the chance of success of the overall system.

1) Using minimal effort and without disruptions to the day-to-day operations of the busy existing airports terminals, ESC automation was able to install 21 S4 BACnet-N2 Routers and expose all existing terminal field points as BACnet points. 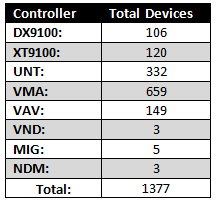 2) ESC automation was then able to start building the graphics and trends on the new BACnet GUI to provide a new operator interface for the legacy system and transfer all monitoring and controlling from the old Metasys system to the new BACnet system. They were able to start this task within weeks of project commencement and without disruptions to the day-to-day operations.

3) In the end, ESC automation was able to connect all the devices (see table to the right) from the legacy Metasys system to the new BACnet system quickly and efficiently. A project of this caliber would have taken months using any other system.

Russell Kramer, the Chipkin Automation Engineer that manages S4 Integration projects states that “Using any other system for a project of this magnitude would have been very complicated and the estimated time to completion would have taken 10 to 20 times longer”.

Founded in October 2000, Chipkin Automation Systems (CAS) are building and industrial automation protocol experts. We sell, support, develop, install and configure protocol converters/ gateways, data loggers, remote monitoring and control applications. CAS focuses on machine to machine data communications and remote monitoring. Our skills and solutions include protocols like BACnet, Modbus, Lonworks as well as interfaces for fire, HVAC, lighting and other systems such as Simplex, Notifier, McQuay, GE to name just a few. With CAS, you are buying a solution not a commodity: The combination of configuration, expertise in this field and support via phone, email and remote desktop tools means CAS is right there with you. As CAS sells its own and solutions by other vendors you can rest assured that CAS will select the most appropriate solution for your application. With offices in 3 countries, covering multiple time zones, we are able to provide support when you need it
.