The Novotel Century Hong Kong hotel is located in the beautiful Heart of Hong Kong’s bustling Wan Chai district. The hotel opened in 1991 and was formerly known as the Century Hong Kong Hotel. The location and hotel facility make it ideal for both Business trips and vacations - just an 8 min walk from Hong Kong Causeway Bay key shopping areas. 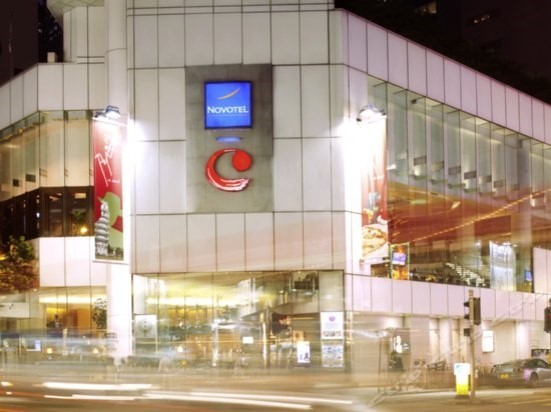 On November 1, 2001, in conjunction with the 10th Anniversary of Century Hong Kong Hotel, the Hotel was re-branded to Novotel Centrury Hong Kong.

The customer wanted an integration that would accomplish several primary goals. First, an upgrade to a modern HMI for operation. Second, to integrate the existing legacy BMS systems with the BACnet open protocol. Third, accomplish this with zero down time so that the ongoing revenue stream from hotel operations was not disrupted.

Implied by these primary goals were several additional requirements that complicated the project.

The multi-vendor BMS that existed in the building before the upgrade was effective but very expensive to maintain and support. Legacy Johnson Controls Metasys® managed the central plant, including NCU, DDC, and OWS components. The system was used for management and control of the following systems:

All other legacy building infrastructure and security systems were implemented on Telemecanique (a division of Schneider Electric) Modbus controllers and PLCs. Earlier renovation and upgrade projects introduced a few BACnet devices to the building. These points were also required to be integrated into the final solution.

In order to meet the customer’s requirements for a cost effective solution with minimal impact on business operations Temco entered into a long term agreement with the hotel. Their innovative multi-year maintenance and services contract included all of the required equipment and integration services to meet the project
goals.

During an initial phase of upgrades in 2013 the S4 Open: BACnet-N2 Router was insuserted into the legacy legacy Metasys® system between the Metasys® supervisory controller and the field devices. After configuration the N2 Router acted as the gatekeeper to ensure that both the legacy Metasys® head end and the new PcVue SCADA system each was given fair access to the N2 field devices and their points as long as both systems needed to co-exist. 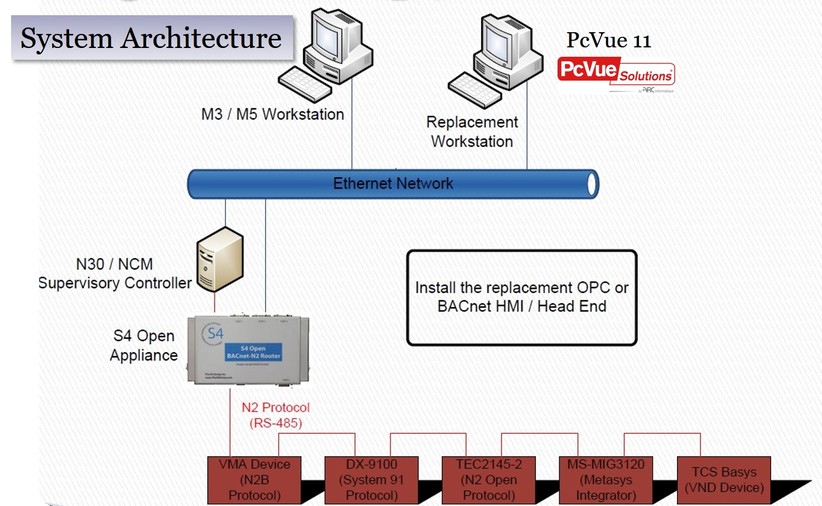 vices provided by the legacy Metasys® supervisory controller were migrated to a Schneider Electric AS-P global controller and the Metasys® head end was decommissioned. This completed the head end phase of the migration to a pure BACnet environment.

The project then entered a transition phase where the legacy Metasys® N2 field devices were phased out as budget and building scheduling allowed. They were replaced by Schneider Electric BACnet MS/TP devices. In 2017 when the last N2 devices were replaced the S4 Open: BACnet-N2 Router was removed and the central plant was fully transitioned to a native BACnet environment. This marked a major milestone and documented the success of the technical approach enabled by the S4 Open: BACnet-N2 Router.

The Temco developed user interface utilizing the PcVue SCADA system provides a modern and efficient environment for operations of the building. The solution included the introduction of SMS alarm notifications to building personnel to expedite service responses. 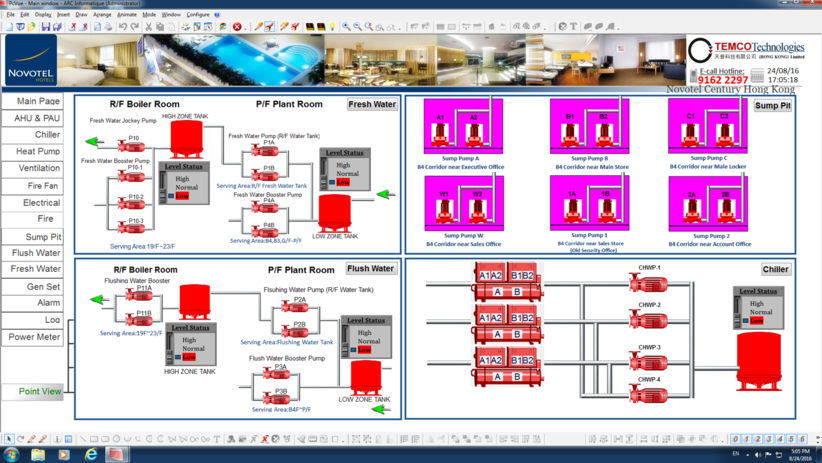 Satisfied with the stable system performance and has seen improved operator efficiency because of the modern user interface design. PcVue is providing the graphical user interface. The Metasys® supervisory controllers, operator workstation, and field devices were replaced by Schneider Electric BACnet devices. All project goals have been met on time, with minimal impact on hotel operations, and within budget.

Temco Technologies H.K. Ltd. provides building automation and energy management solutions which can be seamlessly integrated into a customer’s existing IP infrastructure to create a fully converged networks. Temco designs, installs, and commissions state of the art, open, non-proprietary systems that can be easily accessed and controlled via the Intranet / Internet for local and remote control.

Temco Technologies is the S4 Group certified partner of PcVue in Hong Kong and has had prior project experience using the S4 Open: BACnet-N2 Router in another upgrade project for a high profile hotel.

For further inquiries related to this project, or for more information about Temco Technologies, please contact James Ku, Director, james@temco.com.hk, (852) 2386-8633.