Integration at an old Manufacturing Plant

Prior to this integration project, the former manufacturing plant had been mostly vacant for several years. A large building controls integrator in Virginia shares the success of a unique BAS integration project involving the S4 Open: BACnet-N2 router.

The customer site is a former manufacturing plant located in Southwest Virginia that had been vacant for a number of years. During that time the hard drive in the front end computer for the Johnson Controls Metasys system had failed. The previous occupants had not left any backup media or the original programming discs. The control system, consisting of two NCM350s, 22 DX9100x and 79 VAV controllers, was operating on the field controllers default settings. The building’s management decided to not pursue any repairs or upgrades until there was the potential for leasing the property to a new tenant.

To complicate matters before the project could commence the site suffered an extended power outage which resulted in both the NCM350s losing their configuration and programming. Since no backups were available, the NCMs were removed. CII was left with the task of returning this building to efficient operations with only the legacy N2 field devices to work with.

A tenant was found for an office build-out in a small portion of the space with new rooftop AHU units and VAV boxes. The engineer specified that a BACnet control system be used. CII Service was already carrying the mechanical service on the building and the building management requested that CII be the contractor of choice for the controls part of the build-out. BACnet controllers were installed in this section of the building and a Tridium based supervisory controller was also installed.

In order for the whole building to be controlled and some improvement in energy efficiency obtained, it was decided to link all the AHUs and VAVs to the central plant. CII proposed to the building management that the Johnson Controls N2 devices should be connected to a Tridium supervisory controller to accomplish this task.

During discussions, in addition to the basic requirements of bringing the building back into an operational state and providing the ability to manage and monitor the building’s operation, management expressed their desire to have the system be as “open” as possible, and that any future tenant have the option of having their choice of “front end” interface to their portion of the system.

Given these requirements, CII proposed installing two S4 Open: BACnet-N2 routers from the S4 group, which would allow all the system information to be available to any BACnet front end, including the proposed Tridium device.

Installation of the S4 Open: BACnet-N2 routers went smoothly. The S4 group provided templates that worked for all the different VAV box configurations on the site. The generic template for the DX9100 was a good base to create the custom templates for each of the different DX9100 programs used on the site, and support was easily available when needed. Once the templates were loaded into the S4 Open: BACnet-N2 router each device was discoverable by the Tridium controller and treated like any BACnet device. Access to all the functionality of the N2 devices was provided through the BACnet emulation provided by the BACnet-N2 Router.

Today, the site control system is fully integrated with the central plant being controlled by the demand from the AHUs and VAVs rather than being stand-alone. Individual sections are able to be controlled as needed with any new tenants able to have access to their section either via the Tridium controller, or if they wish, a BACnet compatible front end of their choosing. 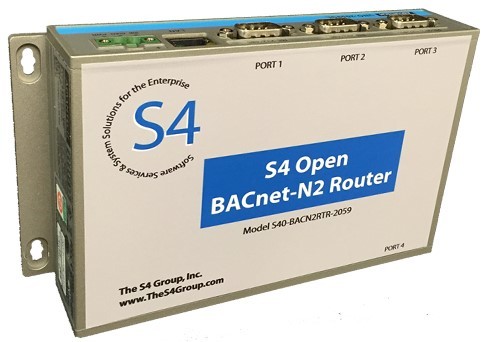 Building management knows that they have a system that is open an adaptable going forward. Thanks to the S4 Open: BACnet-N2 Routers, they were able to obtain a system that can be considered open without needing to replace all the N2 devices. In addition to the flexibility in choice of BACnet front end systems, they also have several viable options for future field device directions. They can continue to maintain the N2 field device environment and they have a clean migration path to replace the legacy N2 devices with minimal impact on operation for the rest of the building occupants.

CII Service is a service oriented HVAC and DDC controls company with branches throughout Virginia and North Carolina, and has over 50 years of experience in providing unique custom solutions to HVAC and building automation requirements. For further information on this project or others including your own needs please contact: Kevin Rogers, Director of Building Automation at KRogers@CIIservice.com