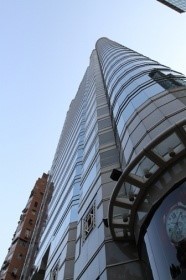 The customer’s integration took place in the beautiful Railway Plaza Building, located in the heart of the business district in Tsim Sha Tsui East in Hong Kong. Railway Plaza is a functional office building with a floor space of 228,000 square feet on 28 floors. Chatham Road South and the Cross Harbor Tunnel are within the vacinity.

The customer wanted an integration that would accomplish several primary goals. First, an upgrade to a modern HMI for operation. Second, to integrate the existing legacy BMS with the BACnet open protocol.

Beyond these primary goals were several additional requirements that complicated the project. One of these requirements was to provide maintenance service for the legacy installation during the upgrade and for an extended period of time after the integration was completed. Since the existing legacy hardware was significantly past its useful life, the client wanted to find an integration solution that would minimize the day one cost and disruption of daily operation when compared to a traditional one-time rip and replace installation of new technology. They also wanted a long term support agreement that would facilitate the replacement of the legacy devices with BACnet compatible controllers should existing field devices fail, or when major renovations are planned for sections of the building. The ultimate goal is to migrate to a pure BACnet open environment for their BMS.

All of this needed to be accomplished while maintaining normal building operation and zero downtime during the upgrade process, so that the revenue stream generated by the building’s tenants was not disrupted. 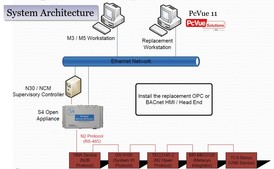 The integration was planned in phases where TEMCO added the S4 Open: BACnet-N2 Routers one by one. The BACnet-N2 Router Upstream N2 Interface was included on each BACnet-N2 Router so that the legacy N2 field devices could continue to communicate with existing OWS and the newly installed SCADA via BACnet at the same time. The Supervisory Controller as a BACnet Client option allowed the legacy Metasys® supervisory controller to participate in the BACnet priority array mechanism to determine which head end was in control of each point.

As part of the integration, a risk assessment and operational evaluation was performed against the legacy N2 devices and those found to be unacceptable were replaced with current BACnet technology as part of the initial integration process. As an example, very old smoke control and lighting control systems were found to be no longer maintainable and were thus replaced. 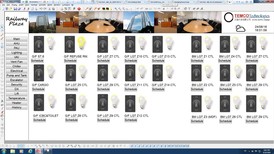 One of the challenges on this project was understanding the native behavior of N2 devices and how that impacted the user. It was learned that when a point in a N2 device is in an “overridden” state that the device will accept and acknowledge normal N2 write commands but that the requested value will not be applied to the point. The device template technology of the N2 Router helped Temco’s team manage this behavior so that the N2 devices responded as desired in the system design. 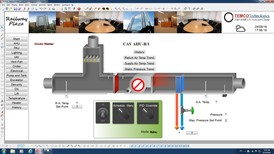 Another challenge in the project was unexpected flooding during the pilot phase of work. Water damage to the BACnet-N2 Router required the assistance of the hardware OEM in order to continue the project. They were very responsive which enabled work to resume on the project very quickly.

The project is still on going, however, after the installation of one BACnet-N2 Router, the client was satisfied with the stable system performance and modern user interface design. PcVue and Metasys® are both monitoring plant conditions. All project goals are being met on time and within budget. After all BACnet-N2 Routers are installed, the Metasys® supervisory controllers and operator workstation will be decommissioned.

In order to meet the customer’s requirements for a long term agreement TEMCO offered an innovative 4 year maintenance and services contract that included all of the required equipment and integration services to meet the project goals. This defined a new business model and strategic approach for the retrofit and upgrading of legacy building controls for this customer and in the region.

Temco Technologies H.K. Ltd. provides building automation and energy management solutions which can be seamlessly integrated into a customer’s existing IP infrastructure to create a fully converged networks. Temco designs, installs, and commissions state of the art, open, non-proprietary systems that can be easily accessed and controlled via the Intranet / Internet for local and remote control.

Temco Technologies is the certified partner of PcVue in Hong Kong and has had prior project experience using the S4 Open: BACnet-N2 Router in another upgrade project for a high profile hotel.

For further inquiries related to this project, or for more information about Temco Technologies, please contact James Ku, Director, james@temco.com.hk, (852) 2386-8638