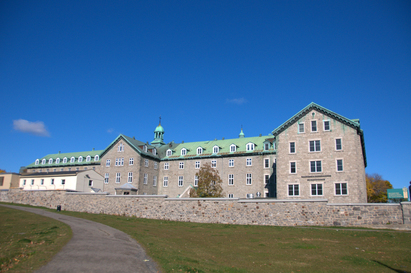 According to Wikipedia, the Hospital has a long and significant history. It was built in 1688. The Hospital was the only French speaking facility in Montreal for two centuries and was home to a variety of medical groundbreaking procedures. During its history, many medical milestones have been recorded at the Hôtel-Dieu, including the world's first removal of a kidney (1868), the world's first removal of a tongue and jaw (1872), the first femur transplant (1959), the first identification of an AIDS patient in Canada (1979), the world's first successful recovery of a person with severe burns to 90% of the body (1981), and the world's first robotically assisted laparoscopic surgery (1993). The present site contains a museum of the hospital's long history.

In 2020, amid the COVID 19 pandemic, the former hospital became home to one of Montreal's largest virus testing sites.

The hospital is a critical environment, so the customer wanted to replace the Metasys frontend and NCU’s without any interruptions. The goal was to seamlessly integrate the existing Metasys controllers to a BACnet IP interface. Another goal was to remove the NCU’s from the site once the integration is completed. The S4 Open BACnet-N2 Router was selected as it is the only product with the capability to coexist with the Metasys system during the changing of the head end system.

The customer was very concerned with the elimination of downtime – the customer did not want any service interruptions during the transfer. While the NCU’s were being removed and the new front end was being installed the building could not be out of service. When the installation was complete, and the building operations were managing in the same way as prior to the project than it would be a success. 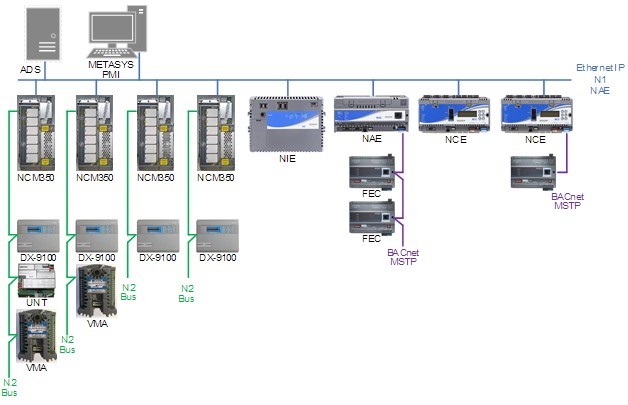 The 2 stages of the project were as follows 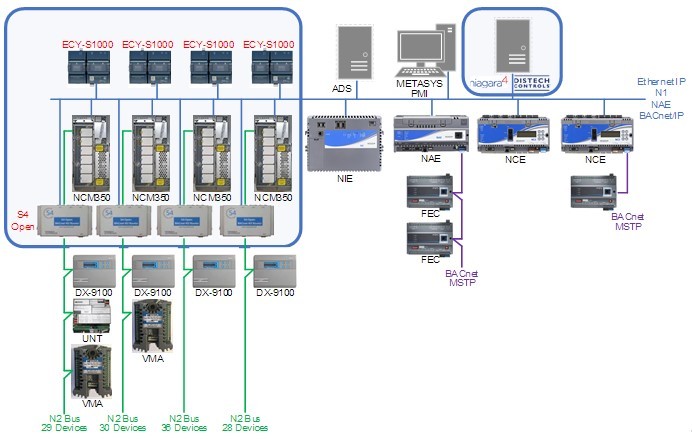 • Insert and configure the S4 Gateways, generate BACnet objects and build a new user interface with those BACnet objects.
• The S2USB485 was used troubleshoot the bus and finetune the gateway. 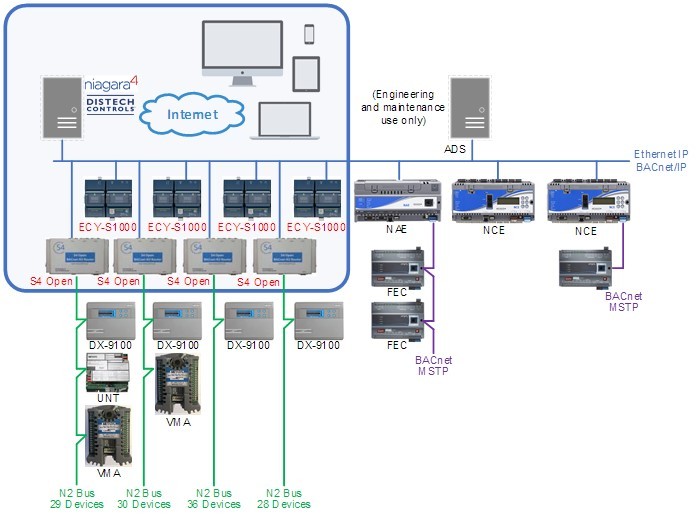 All project goals were achieved.
• The Niagara front end was built and replaced the GPL from the NCU’s to the Distech BACnet IP controllers using the S4 Gateway’s Upstream N2 capability.
• The project was completed while the building manager never lost visibility to, or control of, the building. There was zero downtime. The S4 Open: BACnet-N2 Router is the only product with the capability to coexist with the Metasys system during the changing of the head end system.
• There was zero negative impact to patient services or comfort during the transition.
• The S4 Open: BACnet-N2 Router allowed the customer to continue using the legacy Metasys® N2 devices saving the cost of new field devices and avoiding the intrusive rip-and-replace process that would have impacted patient services.

Louis Simon Capistran, from Contrôles et Régulation, was impressed with the quality of support he received from The S4 Group. He commented “The support received during the project exceeded our expectations. The knowledge of the support team is amazing, and the help is quick and effective. Understanding the specific issues, we had to deal with on site and finding proper solutions is key to getting the job done efficiently and rapidly”.

The company has very good knowledge of the N2 and BACnet network protocols. Since both networks are installed on this site, we have an edge to provide the best method to migrate the older N2 controllers to an effective and reliable BACnet network. Servicing the different brands of controllers is also key to provide excellent service for the site.
For more information about this project contact

About The S4 Group, Inc.

The S4 Group, Inc. is an innovator in software and network appliance development. Products include the S4 Open family of network appliances that unlock the data locked in legacy BAS systems and publish it to open protocols such as BACnet and OPC.