The project took place in a small regional hospital that was built in the 70’s. The building contained 215 Metasys N2 controllers under 4 Supervisory NCM controllers. Connected to the controllers were 2,012 points.

The existing Metasys system had been added to over the years and was still utilizing the originally installed, text based non-graphical interface. The capability of remote access to the control system had also been lost. In their review of the facility, the owner determined that the control system required updating so that they could monitor the system remotely, as well as position the system for upgrade to allow for a future energy metering initiative.

The owner requested migration solutions from Schneider Electric, who had been working on site and had done several pilot projects for the metering initiative, and from the local Metasys service provider. Schneider Electric brought in their Partner in Alaska, CCI Automated Technologies, to assist in upgrading the control system. Schneider Electric's Western Region Products Specialist John Sullivan provided support for the project. CCI surveyed the existing system and proposed a solution that would allow the customer to retain their existing investment in Metasys N2 field controllers and keep the existing programming between the NCM’s in place by integrating each NCM with S4 Open: BACnet – N2 Routers connected to Schneider Electric Enterprise Network Supervisor software with BACnet support. 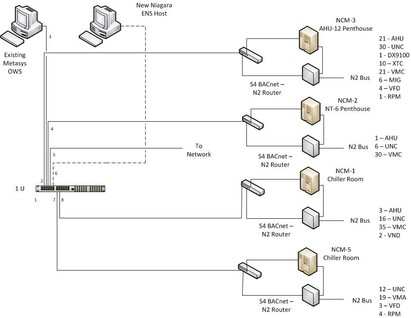 A major concern in performing any work in an operating hospital is keeping critical systems on-line during the upgrade. The S4 Open: BACnet – N2 Router provided the means to keep the existing NCM controllers in place, so critical programming from the NCMs to the field controllers and between NCM’s could remain in place. The S4 Open: BACnet-N2 Router discovered devices on the network through the simple step of taking the N2 bus wiring from the NCM and routing it through the S4 Router. This minimal time of loss of communication to the network kept all critical systems functioning with no disruption. The facility staff was standing by during the migration and was very relieved to see things go as smoothly as they did.

As the BACnet points were mapped into the ENS Server workstation, the existing Metasys Workstation was able to stay on-line in parallel. 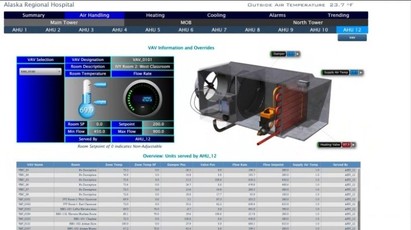 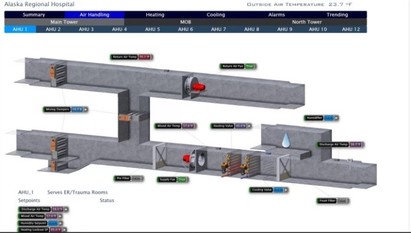 The same procedures used with any third party BACnet system were then used to bring the points into the Schneider Electric system. Testing was done simply by monitoring point values and making set point changes in one system compared to the other.

CCI Lead Project Technician Steven Downer remarked, “Having the ability to keep the existing Metasys system in place and on-line was a key to the success of this migration. The S4 Open: BACnet-N2 Router worked as advertised and we were very pleased with how well things went. The support from The S4 Group was very good. They were very responsive in answering questions during the project.”

The customer is very pleased with the look of the graphical user interface and their renewed ability to access the system remotely. The ability to provide the upgrade in a phased approach so that the NCM’s can be removed over time in a more controlled manner is also a benefit. Finally, as upgrades are done in the facility, they now have a choice in vendors.

A system integration, software and infrastructure technology company, CCI is a Schneider Electric Partner and provides a complete range of building solutions, with a focus on energy conservation, building controls, preventive and predictive maintenance, and security and access controls.

CCI combines the technology resources of a major corporation with the personalized service and ongoing support of a local company. Feel free to visit our website at www.cciautomatedtech.com or contact us at info@cciautomatedtech.com.
Brian Miller, Chief Technology Officer